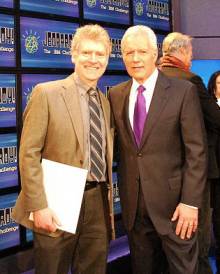 On Wed April 6 at 4pm (Scholarly Communication Center, Alexander Library (Room 403, 4th Floor); Map), John Prager from the IBM Thomas J. Watson Research Center, Hawthorne, NY will give us a talk about the Watson Project. On Feb 14-16, ABC aired a three-part series of Jeopardy, pitting the skills of two of its champions against IBM’s question-answering super-computer system named Watson; and Watson came out as the winner. Watson uses state-of-the-art natural language processing and machine learning techniques. Please join us to learn more about Watson from the researcher behind-the-scene.

Title: Behind the Scenes with Watson at the Jeopardy!-IBM Challenge

Abstract: On Feb 14th, 15th & 16th, the Jeopardy! TV game show aired a unique exhibition match: a contest between the two most well-known Jeopardy! champions, Ken Jennings and Brad Rutter, and an IBM computer, nicknamed Watson. In this talk I will give an overview of the challenges facing an open-domain automatic question-answering system, specifically in the context of Jeopardy! I will describe the high-level architecture of Watson, how its performance has evolved over the last four years and why IBM was interested in this task. I will describe some of the approaches taken by Watson and look at some interesting questions – in particular, I will discuss Toronto.

Speaker Bio: Since coming to work for IBM in 1979, I have been working in several research areas that have converged in my current project activity. From 1979 to 1992, I worked at the former IBM Cambridge Scientific Center (in Cambridge MA), in several projects involving Intelligent User Interfaces. From 1992 to the present, I have been at T.J. Watson, working on interfaces again, on Search and on Question Answering. Since 2006 I have been on the DeepQA research team developing Watson, the computer system designed to play at champion human level at the Jeopardy! question-answering quiz game

My research interests lie within the area of Artificial Intelligence, which can be loosely defined as getting computers to perform those (cognitive) tasks that humans can do very well, but for which correct and complete algorithms are beyond our current capabilities to write. Specifically, I’m interested in using user and domain models to inform activities such as question-answering. I’m also interested in all aspects of language (both natural and computer processing of), which helped my work on Watson which has concentrated on the different kinds of puzzles, word-play and puns common in the Jeopardy! challenge.

Scholarly communication Center Lecture Hall is Room # 403 on the 4th floor of the new wing in Alexander Library. Take the elevator to the 4th floor in the new wing (bear right after you enter the lobby) and just follow the signs.